Lately I’ve been very interested in drawing but lacked the content of what to draw, I was drawing some random geometric shapes, fruits and doodles, but I wanted something more meaningful, so I had the idea to do something that I always enjoy doing, create a multiplayer game. I’ve made plenty of games in my life, but always I relied on third-party assets, so this would be perfect, I would to get to draw a lot while making a game. I always liked that old school open-world RPG games like pokemon and it is one of those that I’m gonna aim for, here’s how it has been going so far.

After watching lots of videos about drawing 2D games I decided to start with some grass tiles, I created a 128x128 file and started sketching. It quickly become apparent that it would be much harder than I thought and also made me realize that 128x128 would be too big for my project, I switched to 32x32 and it became much easier.

But after studying a bit more, I realized that 16x16 would be a better size to begin, which i feel will be even easier as a first project, I’m gonna redraw it later.

Now I needed to draw the main character before putting everything in the game, for the character I started 16x16 right away. Drawing it in a single pose wasn’t too difficult (althought it is a very simple character): 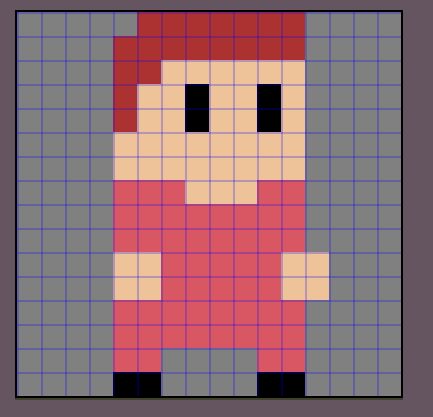 Animation however was a complete different story, I tried to make a simple walking cycle but it wasn’t working out, so I decided to just switch the legs as a bare minimum animation just to see how it will look in the game.

And this is how the game is looking so far:

This is being a lot of fun, I’ll continue to work on it, add support for multiplayer and maybe add new levels, let’s see how far it goes.